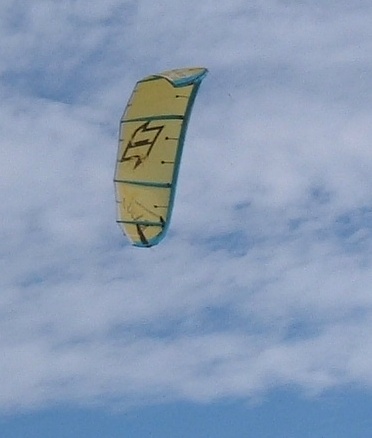 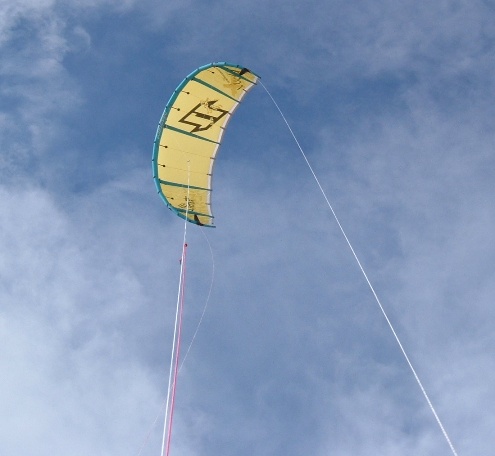 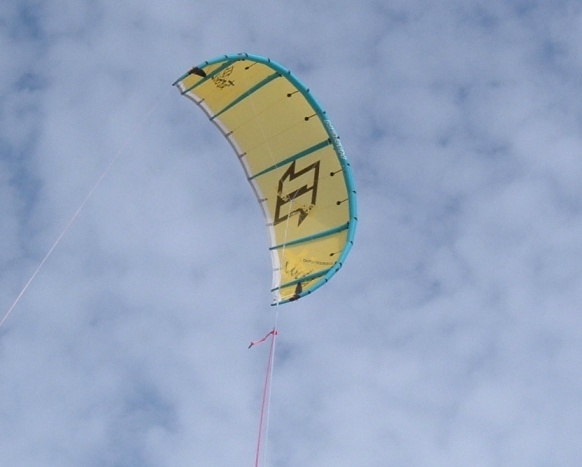 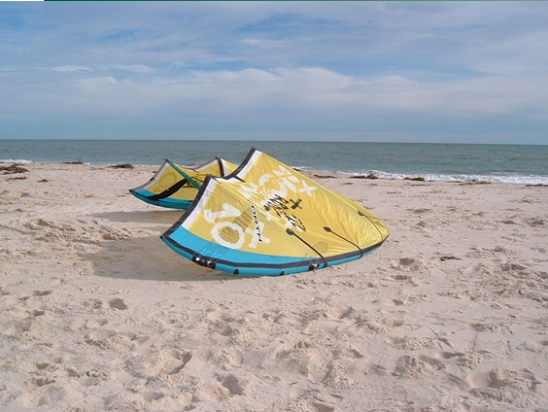 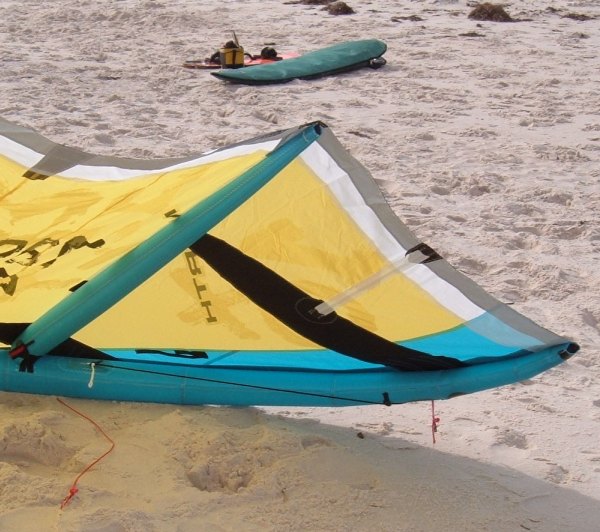 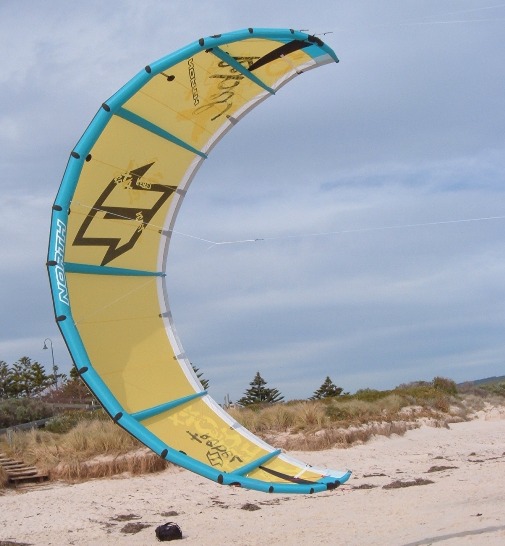 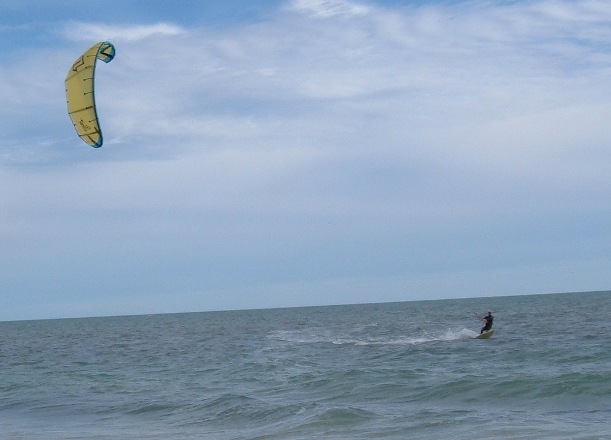 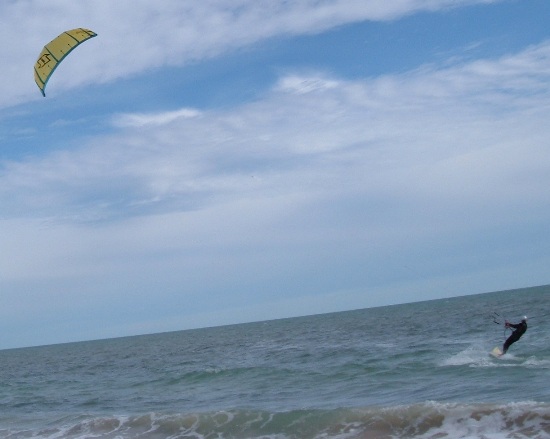 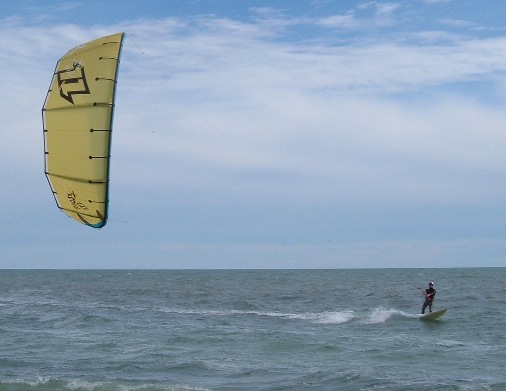 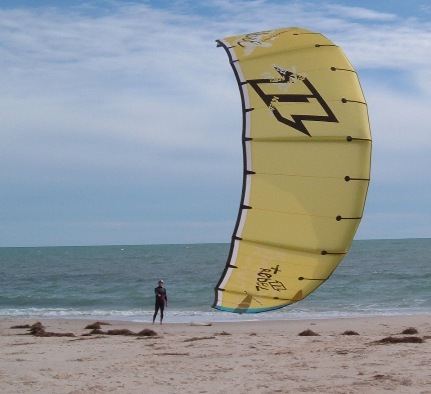 
See also updated report and more photos
The new North Rebel has stepped up a gear and although I could not have imagined how being such a great 2007 kite, the new Rebel is super steady, has significant more bottom end power, lighter bar pressure, better relaunch and improved turning speed.

for those who have readymy review on kiteforum.com I will try to summarise some more findings here after riding this kite multiple sessions now.
Distinctly from the 2007 version the first thing that everyone has said on putting the kite in the air is, wow more power, it turns quicker (larger sizes), it is so steady.
The word that I got from the Australian importers was that the Rebel will take the current Rebel Riders to the next level, having ridden it a few times then I thought, yes that is spot on. The new Rebel says 'we took you this far boys and girls, now we are stepping it up, are you coming too?' my answer is a big 'yes' I am back to working on my board off (simple I know but its my stepping forward) as the kite has more hang and less bar pressure.
Also it can be set up as a C feel with simple steering line tuning and the stopper set up, if that's what you want. I have ridden it as a 68 kg rider from 14 - 27 knots and it has a sudden 'go' level at 14 - 15 knots and you feel lit. My mate rode it last night being a bit heavier rider 78 kg and it was more marginal wind (14 - 17) and kept up wind easily, he immediately pulled off his kite loops and first words: 'it turns great, its got heaps of power nearly as much as my 12m' as he was marginal on that (2007 12m Rebel) just before he swapped to fly the 2008 10m.I am going to have a 10m Rebel as my large kite for 14 - 30 knots and now looking at what my 30+ kite will be this year.For heavier riders the 12m will do the same.
the other thing about the 2008 is that as much as it is asking us Rebel riders (and other kite riders) to step up to the plate and go to the next level, it is so stable that beginners can use it. i would be very confident teaching a beginner on this kite.Relaunch has been improved from the 2007.
The only thing that this kite does which some might blame on the kite is in light wind when over sheeting it can stall. This is not the fault of the kite and is rider error, trying to get too much out of nothing. It is also the reason the kite relaunches better as it creates some reverse lift. (this is why full bows can alost be relaunched backwards but also can be flow bachwards when over sheeted)Anyway don't blame the kite just let the bar out. C kite riders who try this kite might over sheet it in lighter winds for a bit until they get used to it. 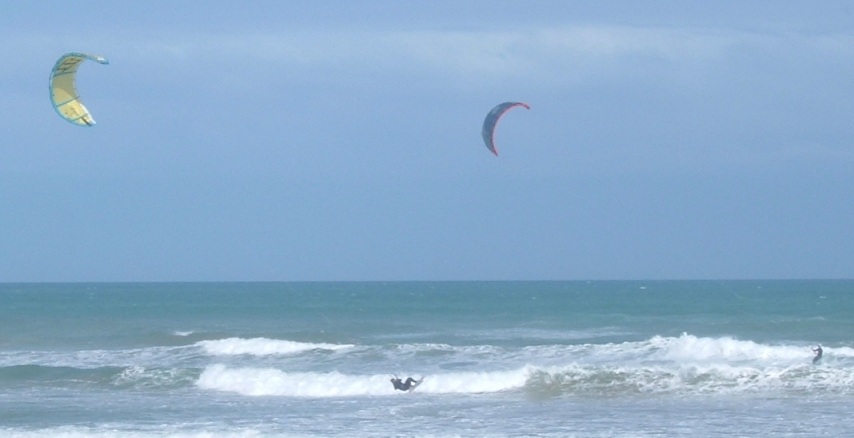 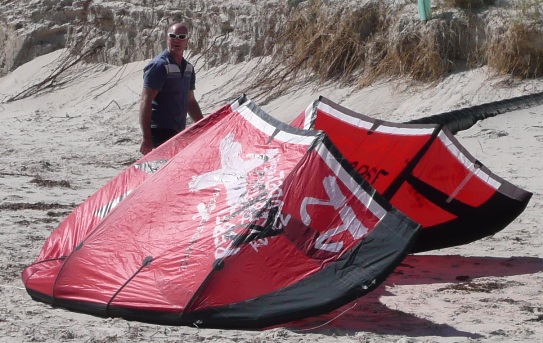 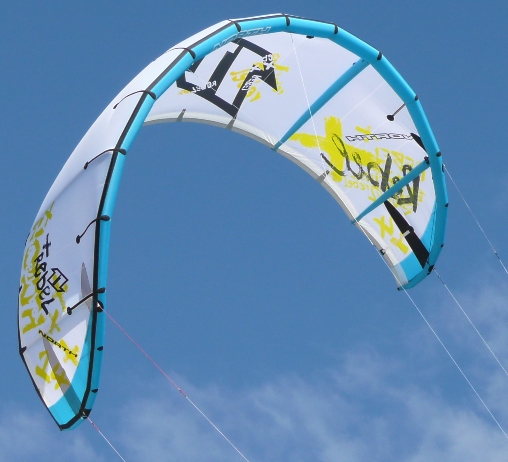 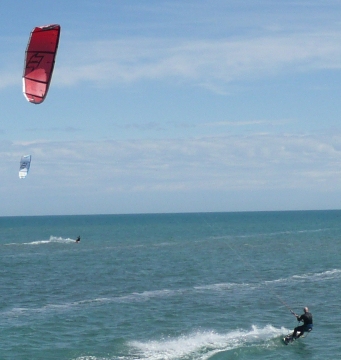 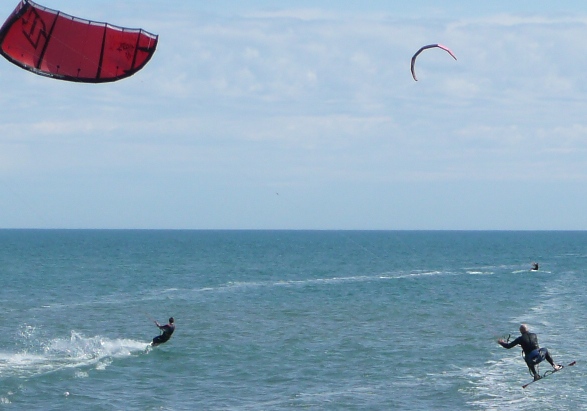 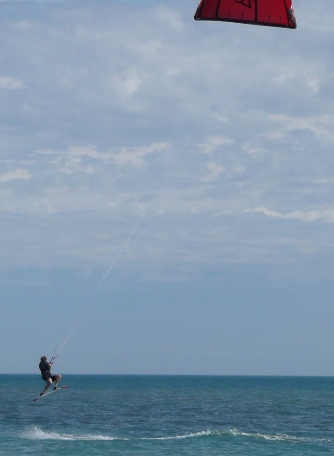 There is a consistent theme riding the new North Rebels,

More power from low end grunt and most impressively true increase in power from apparent wind, Faster turning speed in the larger sizes, and canopy stability. These characteristics are consistent now having flow the 10m, 12m and 14m.

The 12m turning speed is very impressive, to those who ride it coming from Rebels or other kites there is a surprise at how fast the 12m turns. Combined with more grunt means faster whip back into jumps and very solid pop.

The kite loops very nicely and performs as you want it too.

Bar pressure is defintely reduced, again not from just my personal preference, but also from others riding the kite.

I had put my 12m 2007 in for sale as I was very confident that as a light weight rider with a freestyle fish as my lighter wind board (and wave board) I had little need for this larger kite. I have always preferred smaller kites and this was a dream come true. Then the ride on the 14m 2008 Rebel.

Well this kite turns so fast for a 14m I cannot believe it, serioulsy this kite turns fast and with easy bar pressure. In 15 knots I was pulling huge air and holding long hang time. The kite completely changed my mind about larger kites, now I am totally confused as having this extra boost in a kite that whips back and allows you to really use all the juice waiting in the canopy is super sweet.

(Remember to check the updated reports now) including some 30+ wind

10M REVIEW
Well the first test was on a marginal day of 13 - max 15 knots, which was good as I got to test the rumour of more bottom end. Anyhow here we go:

First impressions out of the bag:
Colour:- initally I was not sure but getting it out in the light and up in the air I like the new colour.
Pigtails:- pretty similar, same spit Y 5th set up, good.
Pigtail choices:- same as 2007 with the choice between bow feel and C feel, I tried both.
Extra:- there is a bungee (see photos)  which hooks onto the steering pigtail at the trailing edge, this is to prevent the lines from fouling on difficult water relaunch where the kite is on its back essentially, read the manual for more information.
Wing tips:- there has been a lightening of the load on the reo fabric whilst obviously strengthening in the critical pressure lines. The wing tip battern seems to be a lighter battern which is good for aerodynamics.
Struts:- The other change is that the struts are a more tapered shape with very tiny trailing edge size, I can only assume to increase aerodynamic performance.

Set up:- I decided to shorten the steering lines by one knot as a mid point between what the 2007 kites needed (needing up to 3 knots shorter first versions of the 07 rebel) and because the wind was light I wanted full power in the kite.

On first launch I was instantly impressed as a few things went through my mind at once:
- the kite was set up perfect, the line lengths in this wind was spot on, so there may be no need to tune in fresh wind per the 07 versions, I will see this once I get to test the 08 bar.
The other thing that was immediately apparent was that this kite canopy was super steady, and the kite was highly powered. All this was instantly obvious, the kite was filled with grunt and I put in into some power and pulled the bar in lifting me up, subsequent testing of the power and jumps on the beach showed up a few things. One was that the kite held a lot of grunt for the light wind, the other was the solid canopy - it was like the whole kite was stiff and locked in place. this was not really an issue with the 07s but it was like a mix of stability and power which was immediately apparent.

The other nice thing was the turning speed, the settings were for more bow - slower speed however the kite turned very well, not too whippy but quicker and smoother. I did swap it over to the rear pigtail settings for the steering lines and this increased the speed off the turning somewhat but did not seem to change the depower, on this day, and normally this is where we had all our 07 rebels set.

On the Water
As it was marginal I tried both my twin tip and surfboard. On the twin tip I maintained ground in the marginal wind and was very impressed with the power of the kite. It really felt like a larger kite for power, then on my surfboard I was lit and really it was only 13 - 14 knots with the occassional gust, the 2008 rebel rumour was that they are gruntier down low and this kite shows that is true, quite significantly.

I was very impressed with the turning speed, stability and power the kite presents, so much power for a little kite. It seems to me and juding by the photos that the kite is a little flatter and this would account for the power, however I don't really know this.

Stability:
I tried really hard to get the kite to falter, including underflying it and powering and depowering in and out in the neutral zone, the kite would not do anything except sit perfectly. Even pulling the 5th in somewhat left it stable.
On the water and powered up it was like a balsa wood wing.

I beach launched it twice and it took of very easily, rolling over in typical bow launch position with minimal effort. I can only assume as promised that this relates to even easier water relaunch than the 2007 model.

Although the wind was a bit marginal you could feel the punch that was aparent for jumping. I could only lauch into some smaller attempts but the kite speed and larger canopy makes me itch for more wind and massive air time.
There is no doubt that this kite would rule in the surf, just the testing I did in these conditions showed that up, light winds and a surfboard - perfect.

Combine this with the increadible top end power of the North Rebel and you are  lit boys and girls, lit.

Rave review, highly recommended, as I said before my order was in a month ago. For lighter kiters one kite quiver is a reality, for heavier riders a 10 and a 14 will cover most wind. Alternatively the 9m and the 12m is a great combination as these obvious improvements on the already unreal 2007 range mean that the 2008 kites are the answer. 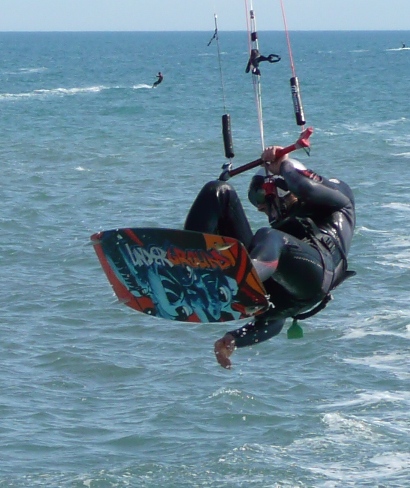