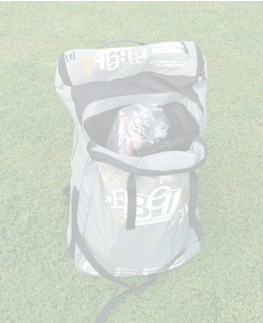 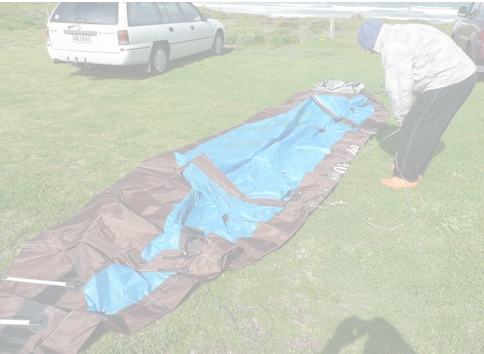 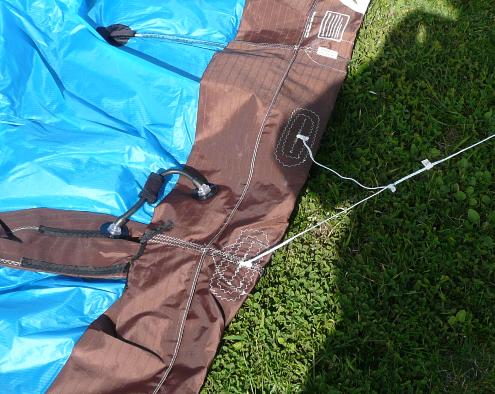 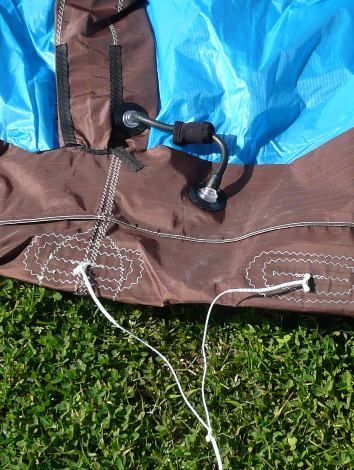 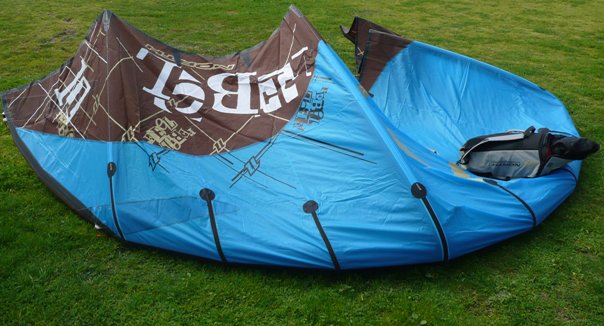 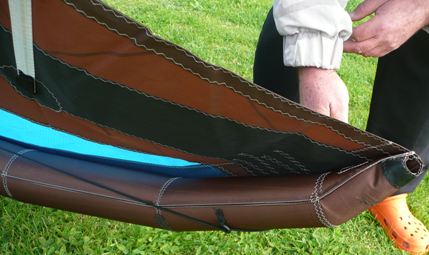 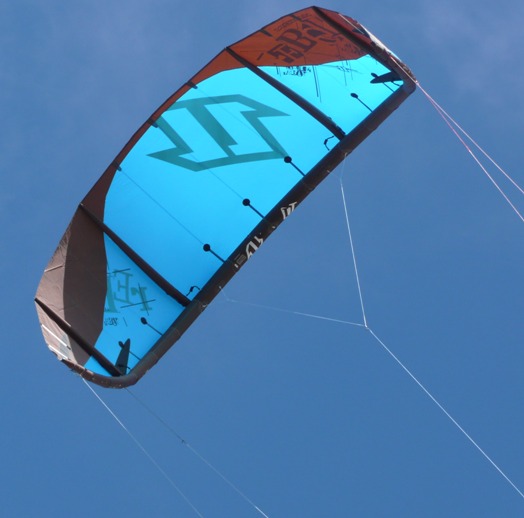 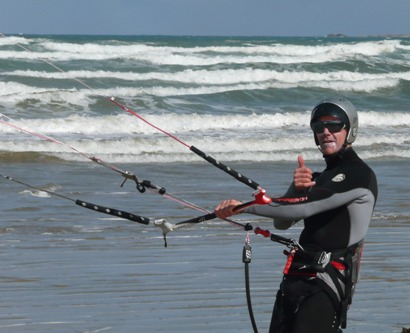 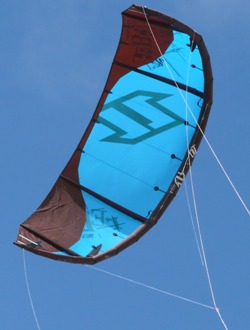 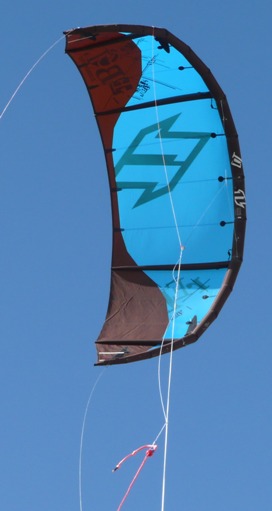 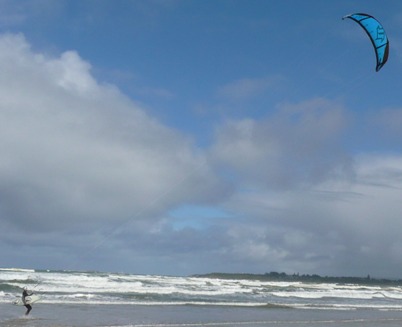 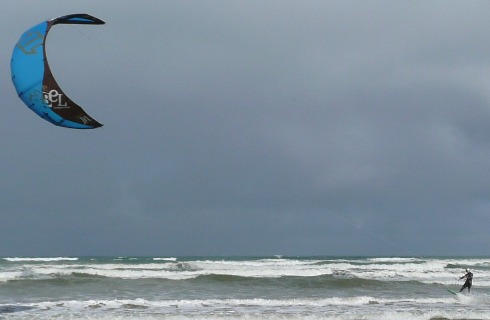 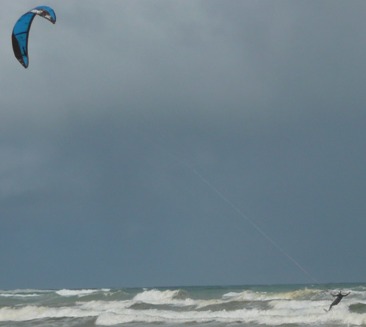 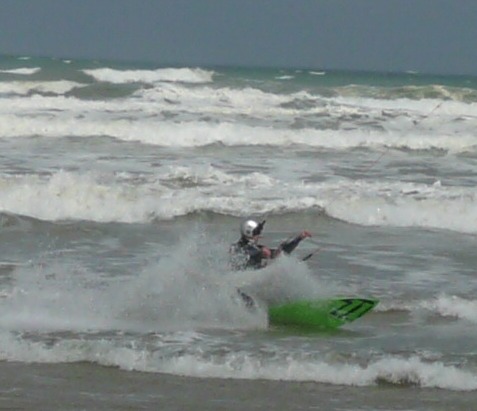 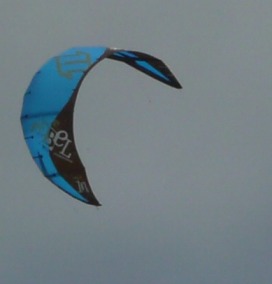 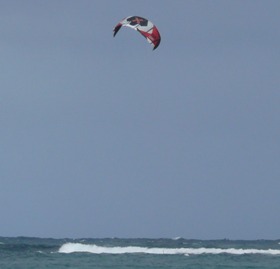 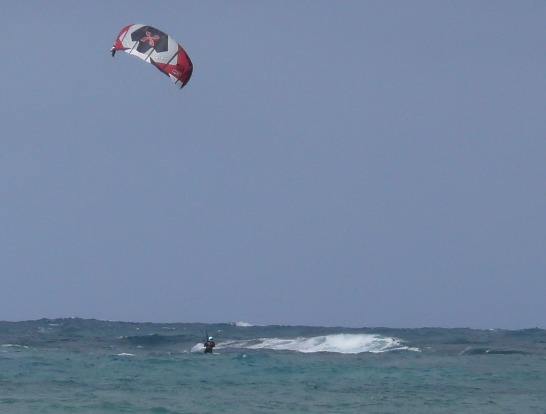 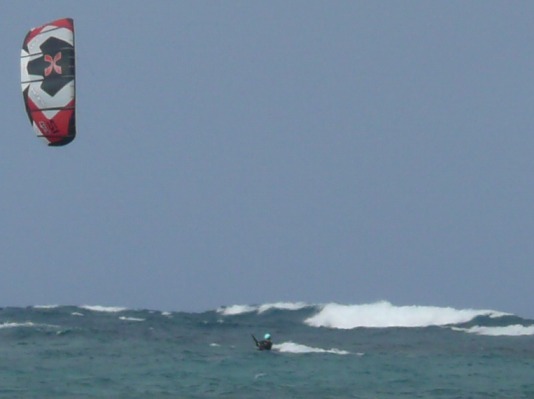 Finally my new North Rebel 2009s arrived and then like clockwork some wind to test it in.
Okay lets get to it.

First Impressions out the bag: this kite is made very very well. I challenge anyone not to be impressed just by pulling it out the bag and rolling it out. The overall material reinforcenment and extra Dacron in the trailing edge makes for a very strong kite, at the same time loosing a strut in the centre and relying on the extra Dacron trailing edge to provide the canopy stiffness means the kite has no actual increased weight.
Relaunch bungees remain, rejig of the Y splits, and 2 litle battens on the wing tips, one pump.
The bar looks great, new iron heart, and the chicken loop finger is straight and hard to prevent accidental slipping off the hook.

First impressions in the air: The kite canopy was rigid, very rigid and like a wing. It did not flutter at all. On turning is was similar to the 2008 10m but slightly quicker with slightly less input. turning is not radically different but just a little quicker and a little lighter.

The other aspect of the kite was the power. The 2008  North Rebel was a gruntier kite, but the grunt was more spikey in the centre of the window. The 2009 North Rebel is very different in this aspect. It is very grunty low end but has a constant feel of power through the entire window. This is probably the marked impression on flying it, the constant smooth power of the kite. It also produces more apparent wind than the previous Rebels, once the kite is on the fly the apparent wind power is quite noticeable.

The other obvious characteristic is the extremely steady nature of the kite. It is extremely steady in the air. there is no bounce or ripple feeling back from the kite in gusty wind. I have been just excepting this as normal feeling of a kite in really gusty wind, after flying the 09 Rebel I am amazed at just how steady a kite can be, added to the smooth power the kite is very impressive.

Now Rebel riders don't panic, some might be starting to think that the kite has changed and left the beautiful flying characteristics of the Rebel behind, this is not the case. lets take the Rebel advantages and check them off:

total depower from the shortest bar throw is still there, no worries at all, instant depower of the Rebel which I am yet to feel in other kites with such instant gratification.
Good bar feedback, yes the bar pressure is slightly lighter again than the 2008 but still it is not too light, good imediate feedback off the kite through the bar and there is no spongy feel that might be associtated with a smoother style kite.

Top end, the new spikey power int he 2008 did slightly start to affect the top end, the kite could take it but you could feel it and with extreme wind it would distort under extreme wind stress. The 2009 witht he smoother more spread power and the new design means the kite can handle high winds and the canopy does not seem to change. I really felt 'different' in the higher gusts, like I had smooth power on offer if I wanted it but did not risk a spikey bang if I put it in the wrong spot.

Aerodynamics: you can feel and see the kite aerodynamics, it does not move about in strong wind or gusty wind, more apparent wind, the kite stays on the same line that it is left on after the last bar input. 2007 Rebels had a slight tendancy to wobble a fraction in extreme wind, not any real issue for ridding them but this is now totally gone.

Water relaunch, I did a quick test in similated conditions and the kite does relanch very easily. The kite moves back to the neutral position and rolls over extremely quickly. The 2008 relaunched better than the 2007 but nothing like the change that the 2009 has produced.

Overall, improved stability, smooth constant power through the window, great turning speed, all the old loved feel and characteristics of the Rebel but with improvement.

As an analogy: it is like the Rebel was a sweet racing Porsche designed to perform and could be relied upon to perform. the 2009 Rebel is the same Porsche but with smoother ride, improved suspension, more comfortable seats, and all the comforts of a limo but in a race body. That's how I felt after riding it once.

Well here it is, got to test the 8m version out twice in different conditions.

The first session was 25 - 27 knots in quite reasonable consistency, on first putting the kite up it was super steady, I had still been riding the 07 7m which is twitchy and hops around with the gusts, I still love this kite (07 7m) as it is a stingy little kite that is so alive, the 8m is quite different. The smooth stability is totally consistent with the 11m characteristics, you can let the bar go and fly under this kite with little fear, the 07 7m will not be forgiving if you fly under it in gusty conditions and likely fall LE down. The 09 8m is not going to do this. It has the extra canopy and extra smooth steady feel, but it does have the quick turning you expect from a smaller kite (but that sometimes does not come with a small kite when I have tested others) the bar pressure is quite light - med and the kite can easily be steered with one hand.

there is almost no sensation of buffeting in gusts and wind changes.

the second session was serious surf in 25 - 33 knots and the kite totally excelled in these conditions. it will sit and wait for you to finish riding the wave and just settle back into the window when riding towards the kite. It whips fast enough to go top to bottom and back to the lip again whilst riding with one hand. The extra power allowed my to ride out the lulls of 15 - 18 knots and cruise back in.

The low end wind range is excellent and i can see myself using this kite a lot more than I ever used the 07 7m whcih was only pulled out in balistic conditions maybe 5 - 8 times a year. The 09 8m is more likely to hit the water starting in just high wind to extreme wind on my rocket fish and with my 68 kg weight.

Best things about this kite is the smooth power, more low end, ability to ride through gusts with almost no apparent change in the canopy and easy bar pressure.